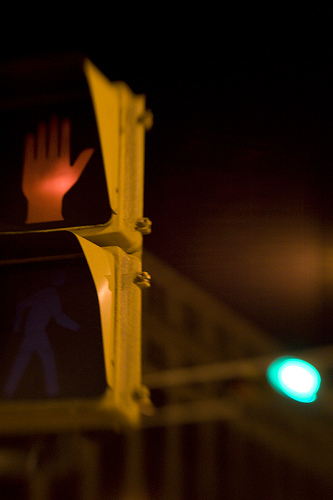 The red hand means don’t walk. I know, I know. If you squint hard enough it kind of looks like it’s waving you forward, but do not let your eyes deceive you. Wait for the little walking figure. I know it looks like he’s frozen in place and not really walking. You probably think it applies only to those sick people from the movie “Awakenings.”

Or, you think, “Well, the hand is not really red, it’s kind of orangeish and, gee, who knows what the heck that means? I’ll just dart into traffic.”

No. No. No. Just think of that old dance routine the Supremes did when singing “Stop! In the Name of Love.” You remember it, don’t you? When they said, “Stop!” they put their hands up. No, their hands weren’t orangey-red, I’ll give you that much. But still, it was the same basic gesture as what’s displayed on the sign and I feel safe in saying that it was not meant to secretly indicate, “Please walk toward me, putting yourself and drivers in serious danger.”

And another thing: You know those white lines that are usually at each intersection? They are there for a reason. They are called “crosswalks” and you are supposed to use them to “walk across” the street. I know, I know. It sounds complicated. But just as we figured out the red hand thing we can do this too. Now, you might think, “But, the place I want to go is in the middle of the street — so I’ll just cross right here.” But here’s the thing. Despite all your mentalist efforts, there are no temporary magical crosswalks painted around you as you jaywalk.

In fact, drivers do not expect you to be there. And they may hit you. And when they do, you will be seriously hurt or killed and some poor schlub of a driver will have to live with the guilt for the rest of his life. “Aha!” you say. “But I’m a Very Important Person who will use the 30 seconds I save by crossing against the light or jaywalking to cure cancer.” Uh-huh. And yet you haven’t. And the odds are you’ll get hit by a car before you do. Jackass.